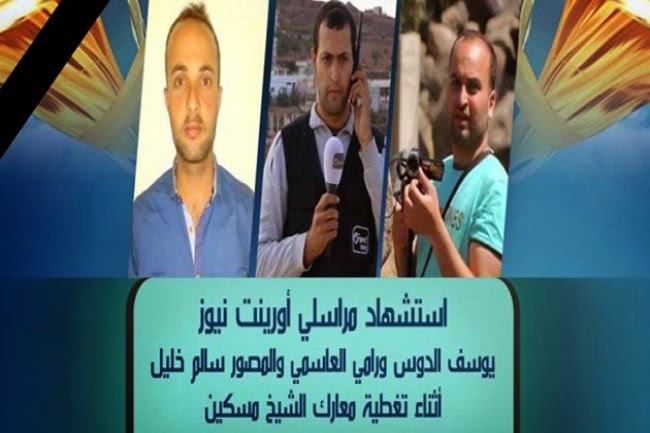 The International Federation of Journalists (IFJ) has declared December a deadly month for Syrian journalists as five more colleagues die in the first half of the month.

Monday 8th December two journalists and their cameraman working for the Syrian opposition TV station Orient News were killed while heading to cover the aftermath of clashes in Dara province. The station said it believed the journalists were directly targeted by the forces of President Bashar al-Assad.

According to media reports, correspondents Rami Asmi and Yousef El-Dous and cameraman Salem Khalil were driving to cover recent opposition advances in the village of Sheikh Miskeen when their car was hit by a guided missile fired by government forces. The car was not marked as a press vehicle, but Orient News said it was identifiable by the satellite dish it was carrying.

The fourth one died in the same area. Mahran al Deiry, reporter of al Jazeera.Net, was killed last Wednesday evening while traveling with the lights of his car off to avoid being targeted. As a result, his car was hit by a military vehicle belonging to the Syrian rebel forces. Before working for Aljazeera, al Deiry worked for the official Syrian news agency.

Lastly, Abdul Rahman Abu Batra was killed last 5 December by ISIS at the city of Lattakia, North-West Syria. He worked as a speaker and journalist at Syrian Al Shaab TV.

The IFJ will be participating this weekend in the congress of the Syrian Journalists Association in Turkey where the subject of safety will be top of the agenda.

According to the IFJ’s Safety website’s figures, Syria remains as one of the most dangerous countries for media workers.